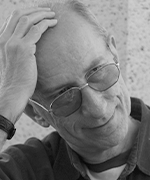 Martin Sherman was born in Philadelphia, raised in New Jersey and educated at Boston University, and has lived in London for over forty years. He was a resident playwright at Playwrights Horizons in New York and was a member of the ground-breaking theatre company Gay Sweatshop in London.

His plays have been produced in over sixty countries and include: Fat Tuesday, Passing By, Cracks, Rio Grande, Bent, Messiah, A Madhouse in Goa, When She Danced, Some Sunny Day, Rose, Onassis and Gently Down the Stream.

His stage adaptations include: E.M. Forster’s A Passage to India; Tennessee Williams’ The Roman Spring of Mrs. Stone; a new version of a Pirandello play, Absolutely (Perhaps!) and Chekhov’s The Cherry Orchard.

He wrote the musical The Boy From Oz which caused a sensation on Broadway in 2003.

Martin’s screenplays include: The Clothes in the Wardrobe, Alive and Kicking, Bent (the film), Franco Zeffirelli’s Callas Forever, The Roman Spring of Mrs. Stone, Mrs. Henderson Presents and the recently released Smyrna, written in collaboration with Mimi Denissi.

The streaming version of his play Rose, with Maureen Lipman, was seen on sky arts.

He has been nominated for two Tonys, two Baftas and two Oliviers.

Scott comes from Birmingham and trained as an actor at Arts Ed. He is an Associate Director for Pleasure Dome Theatre Company, where his most recent production was A Midsummer Night's Dream.