Jack and The Beanstalk

Jack and The Beanstalk

★ ★ ★ ★ ★   Park Theatre has raised the stakes with its production of Jack and the Beanstalk.
- WhatsOnStage

★ ★ ★ ★  An old-school joy while at the same time shaking off the cobweb shackles of the traditional panto.

_____Gazoob, the land of the Giants. Evil inventor Ms Grimm wants world domination and it seems there is nothing her lovely daughter Grenthel and Geoff, the smallest giant in the world, can do to stop her.

Nowen, a peaceful but poor Kingdom. Jack and his mum Tina (Tupperware consultant to the stars) struggle to pay the rent. To make matters worse, they have to get rid of their trusted cow, Daisy. When Grimm’s evil plan lands at their feet, what will Jack do to save the day? 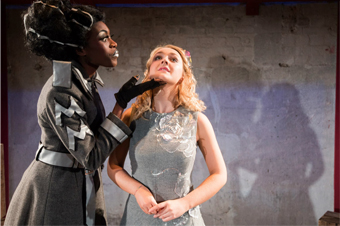 Come and find out: help make Geoff into the biggest giant in the word, have a go at being Daisy the cow and join our singing mariachi shepherds for the greatest adventure in Waa.

This panto manages a rare thing - an evening of light heartedness, comedy and fun audience participation with some sophisticated theatrical paradoxes.
– Theatre Bubble

Bring in your Tupperware for a free consultation

Honestly, raid those kitchen drawers - prizes for those who come up on stage with their Tupperware!